The Disciple of Las Vegas 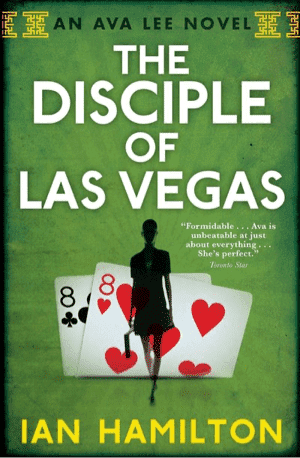 In The Disciple of Las Vegas, forensic accountant Ava Lee is hired by the richest man in the Philippines to recover $50 million from a Canadian land swindle. With the billionaire’s reputation on the line, she follows the money from Vancouver to Las Vegas, to the Costa Rican accounts of the Moneida, a First Nations band that owns The River, a poker web site.

After uncovering an illegal online gambling ring, she confronts one of the world poker greats, David “The Disciple” Douglas, and his partner, Jeremy Ashton. Meanwhile, Jackie Leung, an old target of Uncle’s and Ava’s, has made it rich. He wants revenge, and he’s going after Ava to get it.
Toronto Star's Top 5 Books of the Year
Buy from Canada
Buy from US

Praise for The Disciple of Las Vegas

“Formidable...Ava Lee is unbeatable at just about everything....She's perfect.”
- Toronto Star
“A fascinating story of a hunt for stolen millions. And the hunter, Ava Lee, is a compelling heroine: tough, smart, and resourceful.”
- Meg Gardiner, author of The Nightmare Thief
“Ian Hamilton really knows his stuff, offering intriguing insights into a secret world and a heroine as fascinating as she is fierce. A fantastic read, I can't wait for the next one.”
- Simon Lewis, author of Bad Traffic
“Hamilton has created a marvelous character in Ava Lee.”
- The Globe and Mail (Toronto)
“Like The Water Rat of Wanchai, [Ian] Hamilton's second novel is a fast, reasonably captivating and thoroughly researched jaunt through one or two of the world's international financial underbellies and dubious characters.”
- Joan Barfoot, London Free Press
“Readers will discern in Ava undertones of Lisbeth Salander....Irresistible.”
- The London Free Press
"The desperate situations in The Water Rat of Wanchai are what keep the pages turning, but what will keep readers coming back to the series is Ava Lee."
- Buried in Print Blog
“This is slick, fast-moving escapism reminiscent of Ian Fleming, with more to come in what shapes us a a high-energy, high concept series. ”
- Booklist
"Hamilton makes each page crackle with the kind of energy that could easily jump to the movie screen....This riveting read will keep you up late at night. It may also make you look twice from now on at any woman wearing pointy shoes.”
- Rachel Kramer Bussel, Penthouse
"Lee is a hugely original creation, and Hamilton packs his adventure with interesting facts and plenty of action."
- Irish Independent
“VERDICT: Having published four Ava Lee mysteries in Canada, Hamilton makes his U.S. debut here. This financial mystery echoes Sue Grafton's Kinsey Millhone series heroine, but Ava is edgier and computer savvy; she is as resourceful as Stieg Larsson's Lisbeth Salandar but without the emotional baggage and extreme violence. Highly recommended.”
- Susan Carr, Library Journal